I really like this modification.  As John is growing it’s been getting harder to put his clothes on.  He sits on his dresser with his legs hanging over the edge.  I put his pants over his feet, but then I have to lift him up to standing on the dresser to get his pants the rest of the way up.  So, what I did was really simple.  I added a pull out shelf to his dresser.  It helped that his dresser already had a space between the first and second drawers.  All I needed to do was to buy some drawer slides from Home Depot and install an extra shelf that we already had in the garage.  Now, after I put his pants over his feet, I pull out the shelf and voila!  he is able to stand up himself and I pull his pants the rest of the way up. 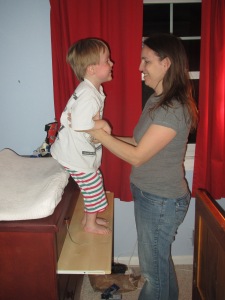